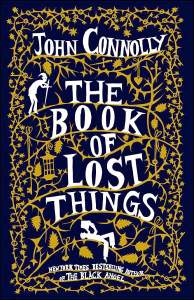 My Dad and I share a love of books, and each Christmas we usually get a handpicked stack from each other to delve into over the year. Often I have heard him speak of the Irish author John Connolly but this was the first year he sent me one of his works. Born in Rialto, Dublin in 1968, an area unfortunately known for its drug pushing and dead-end jobs, came this talented, award-winning writer.

The book I am holding is a beautiful dark blue hardcover. I take the sleeve from it and tuck it away as I often take the book I am reading with me everywhere and they often get a little beat up. It’s intriguing, the usual John Connolly cover has his name taking up most of the front with a bloody heart, cross or skull giving the reader a definite insight as to what the books going to entail. This book cover however is a quirky as the title ‘The Book of Lost Things’. Gold vines and leaves entwine the title with the figures of an old man with a sword and a younger one reading. I feel I’m in going to be delving into a fairy tale, but that is not quite what John Connolly has in store for us readers.

After studying English at Trinity College in Dublin, John Connolly became a writer for The Irish Times newspaper, to which he still contributes. He produced his first novel in 1999 ‘Every Dead Thing’, which was the first of the now famously known ‘Parker’ novels, focusing on the American crime scene, exploring themes that Connolly says interest him; compassion, morality, reparation and salvation.

‘The Book of Lost Things’ begins in the serious setting of the First World War. David, our protagonist of twelve, has lost his Mother. As she slips away David himself looses himself in the books that line his shelves. The fairy tale twist is that these books talk back. David, always the outsider amongst his peers, feels even more threatened by loneliness when his Father remarries. Feelings that are very typical of a boy his age emerge, those of anger, mistrust and displacement. When his stepmother gives birth to Georgie, his new brother, it is the tipping point inside David’s head.

Like the typical fairy tale protagonist he goes looking for what he has lost and finds himself in a warped fantasy land just a gory, if not more so, than some of Connolly’s other works. We journey with David as he makes his way through a land which contains hybrid human wolves, hunters that combine animals with children for better sport, enchantress who kill knights in shining armour and deadly worms who devour villages. While your Disney addled brain tries to make these jumps from the traditional tales to Connolly’s world, the intrinsic moral element to the story is still present. As David overcomes his fears and finds his own strength we follow him into adolescence. Even though he went out in search of his dead mother, the hope of a child, the thing he finds is himself.

Connolly keeps us sober and not totally drunk on fairy tale whimsy as we feel an echo with what really goes on in reality and the ‘evil’ David has to face.

“Let me tell you the truth about the place to which you so desperately want to return. It is a place of pain and suffering and grief. When you left it, cities were being attacked. Women and children were being blasted to pieces or burned alive by bombs dropped by planes flown by men with wives and children of their own.”

With stories touching on cannibalism to homosexuality Connolly cleverly mirrors fears that both adults and children alike, have issues with in reality. He pulls out the darkest elements from folklore and fairy tales and uses it to create this enchanting tale, which is at times startling in its gore, at others funny in its reference. There is an almost Monty Python like moment with the Dwarf characters

This is a coming of age story, that even told through fairy tales, manages to retain the grittiness of reality, human emotion and coming of age.